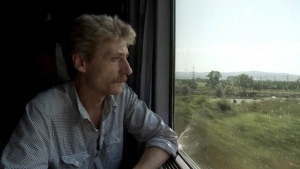 Documentary by Andrei Schwartz. About ten years ago, while shooting in the Romanian high security prison Rahova, the filmmaker made the acquaintance of Gavriel Hrieb who was serving a life sentence for the murder of a state attorney. When he is released on parole after 21 years, Schwartz offers him friendly assistance – yet he is also interested in Hrieb's story from a director's viewpoint. Over the course of two years, he and his team accompany Hrieb who at first is hopeful to start a new life, but has a hard time finding his place in the outside world. Romania is a member of the European Union and the land has changed. Hrieb can't find work or a place where he'd like to stay. Also, his mother's exhaustion and unresolved conflicts put a strain on him. Eventually, the filmmaker suspects that his protagonist is holding back the truth from him and tries to get hold of the case files.