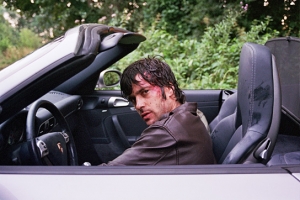 Kobja has bought a piece of land in New Zealand to start a new life. He got the money by stealing cars. The estate agent tells him that he has got a better offer and the price has gone up. He has three days to get the money. Kobja breaks into a BMW parked at a hotel. But he doesn′t know that Russian car thief Goran has already stolen the car. The drunken actress Mikitsch, just fired by her producer from a film set nearby, takes Kobja for her driver. Kobja flees from Goran with Mikitsch in the car. They get lost in the middle of the "Spreewald".

At night a man with a dog suddenly appears who thinks Mikitsch is some sort of a ghost. After convincing the man, Hanusch, that she isn′t, he offers both a place to stay. Kobja is stuck in the middle of nowhere while his time is running out. Eventually he is able to leave Hanusch′s farm but the Russian car thief has tracked him down. Both get into a fight that leaves Kobja wounded...