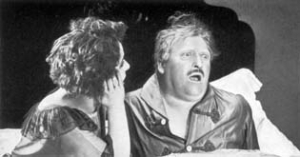 Secrets of a Soul

When a chemist learns that the charming cousin of his beautiful wife returns from India after a long time, he repeatedly has bizarre, frightening dreams. Thus, he, for instance, dreams that he tries to stab his wife to death with a dagger. He is so haunted by the dream that he develops a real fear of knives from the next day on. Meanwhile, his wife and her cousin become more and more worried about the husband whose own delusional despair ends in an attempt to actually stab his wife to death – exactly as he had anticipated it in his dream.
Terrified about his own uncontrollable behavior, the man flees his house, moves in with his mother, and consults a psychoanalyst. During long sessions, the man tells his analyst about his dreams and his memories, about his experiences that influenced him in his childhood, and about the fears that trouble him until today. Like a puzzle, the single fragments fit together and slowly, the analyst is able to approach the heart of the man′s problems.