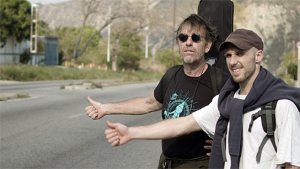 Documentary film about the alleged German left-wing terrorist Thomas Walter, who went underground in 1995 and was granted asylum in Venezuela in 2017. In April 1995, he and two companions allegedly tried to blow up a deportation prison in Berlin-Grünau. Since then, all three have been on the wanted list of the Bundeskriminalamt (German Federal Office of Criminal Investigation). Only when Walter was granted asylum in 2017 was he able to reestablish contact with his family in Germany. The filmmaker Sobo Swobodnik is the partner of Walter's sister. He visited him in the Andes for his film, in which Walter talks about the strategies of diving into illegality and about the solidarity and help he received. In doing so, he always tries not to disclose any information relevant to criminal law. The film is about political resistance and militancy, but also about Walter's modest living conditions and his very ordinary everyday life in his village in Venezuela.