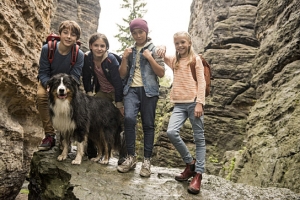 Originally, friends Julian, Dick, Anne, George with their dog Timmy had planned to travel to their cousin’s wedding together with their aunt Fanny, but as can be expected things are taking a different turn: When their car breaks down, the group is forced to stop over in a small town, where in a natural history museum the festive unveiling of a bone from a hitherto unknown dinosaur species is taking place. To everybody’s surprise, a young man called Marty announces that his late father has left him a map leading to the rest of the dinosaur skeleton. When the map is stolen, the Famous Five set out to help Marty find the dinosaur valley anyway. Also some of the townspeople join the expedition. It doesn’t take long for Julian, Anne, Dick and George to realise that a thief is in their company.