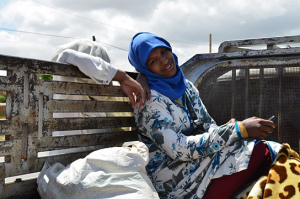 Documentary film about the murder of 14-year-old Fatima Osaadan in Morocco and about the social contexts that become visible behind this crime. Fatima Osaadan worked as a maid in the house of a wealthy family. There she was abused so badly, especially by the jealous mistress of the house, that she eventually died. The case caused major furore throughout Morocco. In his documentary, Hakim El-Hachoumi shows the pain that Fatima's death caused because many Moroccan families from rural regions know the situation all too well: out of financial need, they have to send their daughters to the cities, where they work as servants for the middle class. Looking beyond the case of Fatima, the film gives insight in the two worlds of Moroccan society that come into contact in these working conditions: the rural, archaic Morocco from which the servants come, and the urban, modern Morocco of the wealthy up-and-comers.