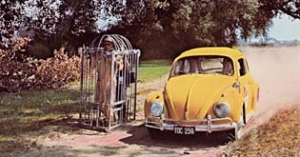 Disney’s magic Beetle "Herbie" ("The Love Bug", 1968) was followed by its German version "Dudu": Ben wants to take part in the East African Safari with his super car Dudu but his application is rejected. Thus, he joins the quirky Scot James Butler who takes part in the cross-country rally in a hovercraft as a service car. On their way, they have to master several dangerous situations with unwelcome rivals and diamond smugglers. In the end, Dudu wins the race, and Ben is able to give the prize money to attractive physician Daktari Jo and her jungle hospital.

all directed by Rudolf Zehetgruber