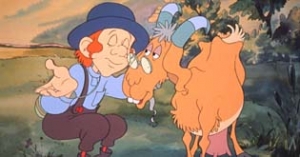 After God had created the world, he decided to distribute intelligence, wisdom and stupidity in equal amounts. He entrusted this task with three little angels. Each of the angels was given a bag with one of the virtues. But the bag containing stupidity was so heavy that the little angel was immediately dragged down to earth.

By mistake, he tipped the contents of his bag over the sweet little village of Schelm! And it would have to be this very same Schelm that our eleven-year-old hero Aaron moves to. The inhabitants of Schelm consider themselves the "wisest among the wise", but Aaron soon finds out that the overdose of stupidity has made them into amusing and loveable fools. Directly, an evil magician appears and creates a fearsome giant, the Golem, which destroys Schelm. Aaron and his faithful companion, the talking goat Zlateh, must prevent the magician from usurping world domination. They follow the Golem and sneak into the magician′s haunted castle. In a breathtaking show of force they manage to destroy the Golem and turn the magician into a statue of stone. But Schelm is devastated, and the inhabitants decide to leave their village.