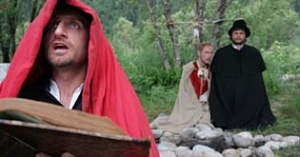 God’s Craftsmen tells the story of the wandering painters Bruno and Buffalmacco. In Upper Bavaria in the year 1830, they are commissioned to paint the fresco Jesus Heals the Blind – but the two are mainly just enjoying life. However, the greedy prior, who cares more for his dog Mariedl and his money than anything else, keeps hounding them. One day they meet the beautiful Agnes – the personification of all their dreams and desires. But she is the wife of a jealous farmer. And then there is Xaver, another one of Agnes’ admirers who even asks the painters to help him in his efforts to win her over. Bruno and Buffalmacco develop a plan. But will they be successful? Without luck even some of the best plans are doomed to failure. But since luck rules the world, sometimes even a little bit of luck is better than a whole lot of wit.
God’s Craftsmen is an adaptation of of a novella from G. Boccaccio’s Il Decamerone. Beyond that, the film is indebted to the images and spirit of Wilhelm Busch and Carl Spitzweg and follows in the tradition of folkloric tales and ballads.