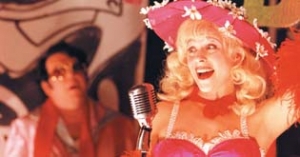 Based on A.S. Neill′s best-selling novel of the same name, "The Last Man Alive" is a delightful romp between fantasy and reality.

Set in a small and cozy boarding school nestled in the woods, the story begins when a group of eight children gather around their favorite teacher, Professor Birnenstiel.

A colorful storyteller, Birnenstiel launches into an incredible tale in which he and the children are the protagonists. Their fantasy adventures take them into outer space, from where they see a green cloud envelop the earth. Upon their return, they discover that all human beings have been turned into stone. Along with a good-natured billionaire and a ditsy French beauty queen, they stumble from one adventure to another. Whether fleeing from killer tomatoes or from black-and-white TV characters who suddenly emerge from the television screen, the children and their adult friends tackle one predicament after the next with energy, cleverness and solidarity. Or at least that′s how the "real life" children would like to have it! Whenever Professor Birnenstiel fails to make his characters heroic enough, the children chime in and demand a change in the story. In Birnenstiel′s tale, he himself is supposed to be the "last man alive". But will the children agree to be simply eliminated from the story?