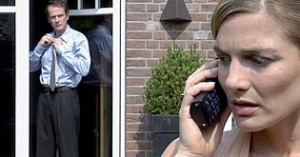 The Things Between Us

Myriam lives a sheltered existence in a small Catholic town on the Lower Rhine. She is married to Bernd Mölders, an ambitious young mayor, and they have just moved into a new house together. They love each other and everything in their life seems to be just perfect. And then she finds out by accident that Bernd makes regular trips to a brothel in neighbouring Holland. There is no one with whom she can discuss this – least of all her husband. And what would she say to him anyway? What would be the point of making a scene? That wouldn′t change his desire for prostitutes. And so she decides to try to understand his fascination by going to a brothel herself and working there in secret.

Myriam finds herself in a strange twilight world where she soon feels more and more at home. In a sudden rush she discovers her own sexuality, a side of her she can′t live out with Bernd, because he wants her to stay the way she always was. And so Myriam persists in her double life – not realising that she′s becoming addicted to a realm of illusion.