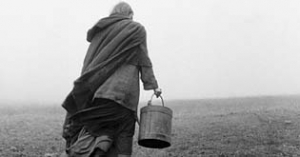 "In Turin on 3rd January, 1889, Friedrich Nietzsche steps out of the doorway of number six, Via Carlo Albert. Not far from him, the driver of a hansom cab is having trouble with a stubborn horse. Despite all his urging, the horse refuses to move, whereupon the driver loses his patience and takes his whip to it. Nietzsche comes up to the throng and puts an end to the brutal scene, throwing his arms around the horse's neck, sobbing.

His landlord takes him home, he lies motionless and silent for two days on a divan until he mutters the obligatory last words, and lives for another ten years, silent and demented, cared for by his mother and sisters. We do not know what happened to the horse."

These are Béla Tarr's introductory words at the beginning of his film, which picks up the narrative immediately after these events, and is a meticulous description of the life of the driver of the hansom cab, his daughter and the horse. This Hungarian director's new work bears all the hallmarks of his inimitable style including long takes, black-and-white photography and almost no dialogue.