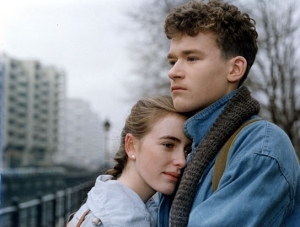 The Girl in the Lift

Frank, a tenth grade student, falls in love with his classmate Regine. His father is a well-connected plant manager in the GDR; Regine's mother is a single parent with four children. Regine wants to become a kindergarten teacher, but her grades are poor and she is not allowed to apply for technical college. Frank champions her and seeks an open discussion about these rigid regulations. But his criticism is nipped in the bud. When he tries to oppose this, he feels the pressure of the state being brought to bear against him. He senses the conformism, egotism and lack of interest in change all around him. Will he remain strong?

In his last DEFA film, Herrmann Zschoche, who is being honoured with the Berlinale Camera, built upon two of his most important works: his banned film "Karla" (1966/1990) and "Insel der Schwäne" (1983). All three films call for courage - especially moral courage - in undemocratic times. Created between December 1989 and June 1990, "Das Mädchen aus dem Fahrstuhl" is one of the director’s previously unknown works. A historical film about the recent past that sank into oblivion in the cinemas of a newly united Germany and has never been broadcast on German television.