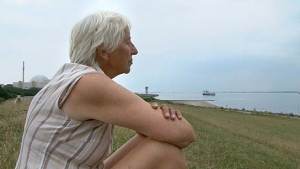 "Das Ding am Deich" documents the history of the people's resistance to the nuclear power plant near the municipality of Brokdorf in Northern Germany. In an area inhabitants would characterize as rather conservative, a broad coalition developed that protested massively against the plant's construction in the 70s and took to the streets for years to come. However, against all opposition and notwithstanding the citizens' concerns, the nuclear power plant was started up and connected to the grid in 1986, just shortly after the Chernobyl disaster.

More than 20 years later, the filmmakers want to know how the nuclear power plant has changed the lives of the people. Is there still a protest movement? For many months they accompanied individual citizens in their everyday life and conducted interviews with veteran protesters. Then, the present catches up with the past: During shooting, the Fukushima disaster occurs.