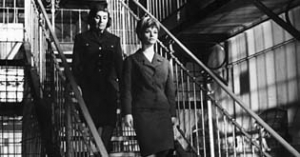 The Story of a Murder

In the mid-1950s, mayor Zwischenzahl is killed on the day of his inauguration in a West German town. The killer is Ruth Bodenheim, a Jewish woman, who wanted to avenge the death of her parents. Zwischenzahl, a former SA member, was apparently involved in the deportation of her parents to a concentration camp during the war. Ruth cannot bear the horrible events and the death of her parents and wants to open the eyes of the town′s residents. Even her loving husband Dr. Martin cannot ward off Ruth′s sense of justice and stop her living in the past. She does not want any compensation but an open litigation. Impressed by Ruth′s perseverance to bring the complicated case of Zwischenzahl to the public′s eye, prosecutor Dr. Hoffmann decides to assume Ruth′s defence.