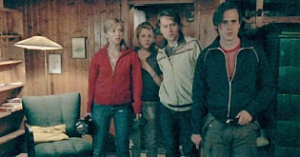 Two young couples go on vacation in the Black Forest, where they rent an old hunting cabin. After the two men try to get an old television set to work, mysterious occurrences abound: On the TV screen, snippets from seemingly ordinary programmes appear, which are in fact manipulated by a dark force trying to provoke mischief and aggression among the inhabitants. Apparently, the past death of a little girl has put a curse on the cabin, which threatens the lives of all visitors.