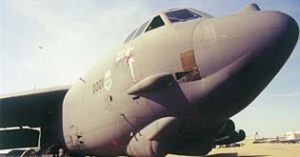 The US air force deployed its B-52 bombers in Vietnam, the first Gulf war, in Afghanistan and in the Kosovo. In his documentary, Hartmut Bitomsky follows the historical traces of this machine, which for many people became a symbol of power and destruction. Hundreds of derelict B-52 planes lie in the Arizona desert, steel giants stripped of all their usable parts, conserved by the dry heat and waiting for their demolition – or a new mission.
The film recounts the history of the B-52 model and its use in the numerous war campaigns, while admirers, opponents and victims alike voice their views. Like the machine itself, its surrounding myth is deconstructed in the course of the film. Bitomsky reveals the inherent dichotomy the plane, which is a testament to technical inventiveness and innovation, yet yields only destruction.