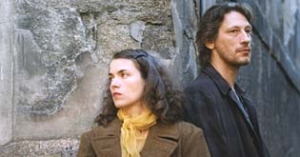 Somewhere in Europe at the end of the 20th century. Everything has lost its apparently safe place. In the city, unemployment rules like a plague. Anton is also affected. Leni, who he has been living with for years, works as an ironer in a laundry. She tries to bring life to the dark cocoon Anton has weaved around him. A life that is not obliged to materialism and work but to sensuality, belief and the possibility of love as the ultimate anarchistic and dignified act against a barbarous environment. She tries to follow a longing, bigger than the small being in the narrow world of disintegration, fear, doubts and lethargy.

Torn apart at dusk, each of them fights alone in their nocturnal odyssey through the black of the night and their own souls. Desperately rebelling against their loneliness, they will cross the lives of different people, will be weaved into strange fates, will hurt and will get hurt, tumble, fall and get up again, and will face each other with the taste of darkness and a certainty in their hearts which was unknown to them before. Nightfall speaks about love - not in its beginning, where it is still illusionary, but when it is about to end, while it had just begun to become essential.