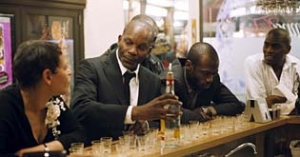 Lionel, a train driver from a Parisian suburb, has devoted his life to looking after his daughter. He knows that Joséphine is now old enough to stand on her own two feet, but he is attached to her, and Joséphine does not seem ready to give up the security of life at home either. One of their neighbours is taxi driver Gabrielle, whose tentative efforts to make friends with father and daughter meet with little encouragement; another is Noé, who keeps his apartment exactly as it was when he inherited it from his late parents.

In her film, Claire Denis relates everyday things: Lionel’s colleague René’s retirement, the death of Noé's cat. The quiet nuances make it palpable that it’s time for all these people to let go: Lionel must relinquish his daughter; Joséphine must leave her warm nest; and Noé must shake off his past. But it is René, who has always lived for his work, who perhaps dares to take the most drastic step.