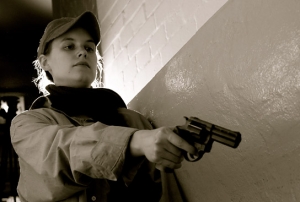 Georg is 33 years old and works as a stage designer in a theater in the GDR. He makes no secret of his homosexuality. During the Cold War he stands up for the abolition of the gay paragraph 175 in East Germany. This Paragraph 175 is criminalising sexual practices  between homosexual people. This fact is Georg keeping occupied deeply. He isn't happy with his homosexual relationship at all, so he would not be adverse having bisexual relationships. In the theater Georg prepares its first role. He wants to bring on stage "The Mother" by Maxim Gorky. His own special relationship to his mother motivates him. Georg organizes an audition. In one of the women he's particularly and personally interested in. She offers him sex for a job. But when she threatens him to report it to the director, or even to go to the police, he freaks out. He places all on record to a young writer who wants to make a book, a "Men's protocol".