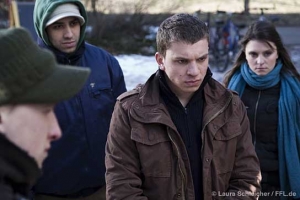 Ben has gone down the wrong path. He repeatedly attacks people, robs them and doesn’t stop at physical violence. His deeds soon bear consequences: he lands in juvenile prison. But he shows no remorse. Social worker Niklas offers him the chance of a fresh start. Ben must prove himself outside the prison walls. He turns the offer down fiercely, but then consents.

Ben becomes the freshman in the Waldhaus. There are neither fences nor walls, but a strict daily routine, never ending rules and evaluations that enable a rise in hierarchy. Ben rebels in the familiar community, disregards rules and stirs up the group. When one member of the group is sent back to prison after an aggressive outbreak, Ben realizes that he has to watch out.

Ben begins to engage in the project and enters the community step by step. But when Niklas’ wife Eva returns from a retreat, he is shocked. She is a former victim of his assaults, the one that was never resolved. A game of hide and seek starts for him, where he is permanently on the edge of being found out by Eva. For Eva, every day becomes a harder challenge. The more she tries to forget the past, the more she is overwhelmed by it. Niklas’ worry for his wife grows, while Ben fights to keep his secret safe.

But then Eva’s suspicion is aroused and Ben’s situation seems hopeless. For him as for Eva, a world falls apart. Ben experiences the pain of guilt for the first time, a conscience, and Eva feels the weakness of a victim that wants to forgive but cannot. What she held to be true suddenly loses its value. And the fact that they live together evolves into a crucial test and nobody knows how it will end.