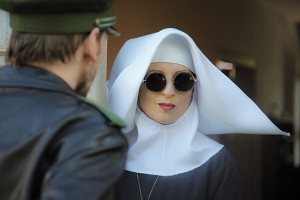 Somewhere in Ger(wo)many ... A radical female ‘army of lovers’ is preparing itself for a final revolution. Women are discussing, campaigning, menstruating and pondering the decline of patriarchy, learning about single sex reproduction, and having sex. But then of all people a young soldier appears, seeking refuge at this feminist convent; moreover, one of the women-warriors turns out to be a police informer. This brings their strict superintendent on the scene. And ‘big mother’ is not amused. "Two cocks! And a cop! In our house! That’s intolerable!" But one question remains: is it possible to have equality in a corrupt system? Or will cocks need to roll first?!

As if Valerie Solanas had directed an episode of "Schoolgirl’s Report", Bruce LaBruce’s latest piece of shenanigans revolves around a utopian world without men. The Canadian director, experienced Berlinale guest and Teddy award-winner (for "Pierrot Lunaire") serves up a merry, anarchic dance in which political slogans fall as trippingly off the tongue as religious acclamations. Their sermons are – naturally – rounded off with ‘A(wo)men’. Sarcastic, very funny – and as queer as it gets.