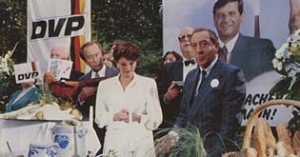 Non Stop Trouble with the Experts

This film sees Dieter "Didi" Hallervorden, the famous comedian of the 1970s and 1980s, in a more ambitious satire than his usual slapstick comedies. Hallervorden plays car mechanic Willi Schulze who operates a small car repair shop together with Paul, who has escaped from an orphanage. Then, a car drive with the US election campaign expert Willy Schneider (also played by Hallervorden) ends in an accident in which both Schulze and Schneider lose their memory. From then on, they are constantly mixed up with another because of their close resemblance. Thus, car mechanic Willi gets stuck in the role of election campaign professional Willy and push-starts his client’s campaign with car mechanic lines like "We have to tighten the screws".